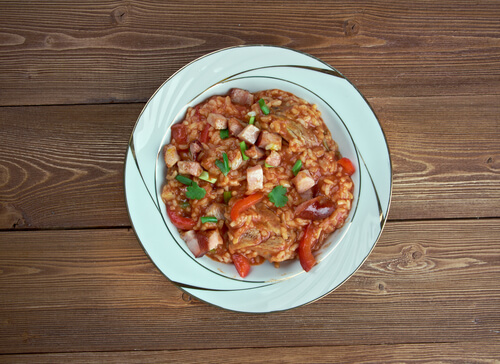 Charleston red rice or the Savannah red rice as it is known in Africa, is a rice dish commonly found along the Southeastern coastal regions of Georgia and South Carolina, it is known simply as red rice by natives of that region. The Rice is nothing unique but its rich history brings out quite the flavours.

This was a traditional meal of the West Coast Africans, brought over to the U.S. by enslaved Africans originating from the West Coast of Africa. This cultural food is almost always synonymous with the Gullah or Ogeechee people. The heritage that is still prevalent throughout the entire surrounding regions of South Carolina and Georgia. The main component of the dish consists of the cooking of white rice with crushed tomatoes instead of water and small bits of bacon or smoked pork sausage. Celery, bell peppers, and onions are the traditional vegetables used for seasoning. This dish was a delicacy that dealt with an occasional use and usually was considered a rare treat because the dish would take a sufficient amount of time and effort to play out perfectly.