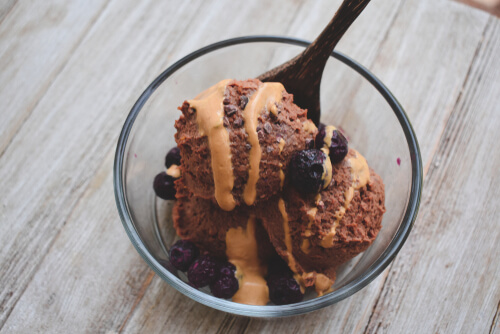 A vegan, but you feel you’re missing out on dairy, especially ICE CREAM? Well not anymore. Chocolate is not something you can ever let go. It so happens that some people turn out to be vegan by choice and some people are allergic to dairy products. It’s hard to see another gorging on chocolate ice creams in the summer, and you have to settle with something else. Well, if you’re a vegan and if you’re dying the frozen bite of heaven this summer, then this recipe has got you covered. This specialized vegan recipe contains coconut milk as a substitute for milk which is very nutritious and tasty. Go ahead and give a try to this yum ice cream recipe.

Coconut milk used in the making of this vegan ice cream has numerous health benefits. Coconut milk helps in weight loss because of something called MCT (Medium Chain Triglycerides) through a process which is called heat production or thermogenesis.

Coconuts contain an acid called Lauric acid which has been known to boost the immune system. Coconut milk is rich in saturated fat and calories which makes it a nutritious choice. The milk is rich in minerals and vitamins.