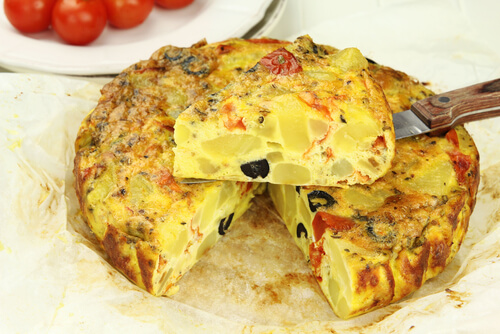 Tortilla de Patatas is probably one of the best known and universally liked Spanish dishes. It is simply sliced potatoes and chopped onions fried in olive oil, then mixed with beaten egg and cooked to form a solid omelet (similar to what the Italians call a frittata). According to the book Culinaria Spain, the tortilla de patatas has been around at least since the late 1500’s when it was mentioned in a notebook belonging to the head chef for Kings Philip III and Philip IV of Spain. Now, it is simply known as tortilla Espanola or the Spanish omelet.