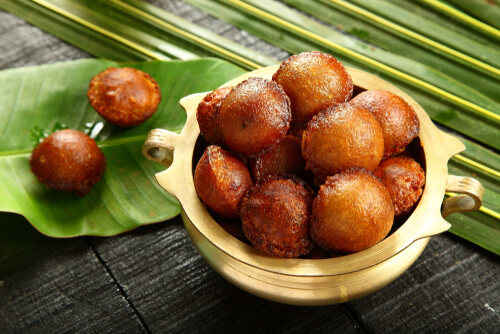 Unniyappam, also called Unni Appam, is a traditional delicacy of Kerala cuisine. The sweet fritters are most popular as an evening snack and are often prepared during the festival season. Unniyappam derives its sweetness from 9banana and jaggery.

This is one snack that you can make ahead in huge batches and store for consuming later, it tastes as great as fresh. Several variations to this appam are equally popular, especially using jackfruit in the appam brings out the sweetness of the fruit making the appam even more delicious. Make a batch of unniyappams, store them in a casserole to retain the flavor and freshness until it’s time to serve!

Coconuts are extremely rich in fiber, minerals such as iron, sodium, selenium, phosphorous, and calcium in addition to having several vitamins such as B1, B3, C, and E. It also contains fatty acids with a number of medicinal uses