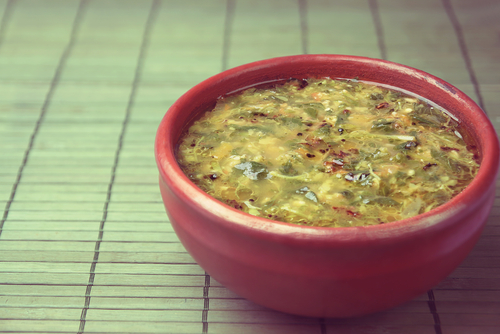 If you take a trip back to ancient India, they used herbs as remedies for most diseases. The technology has now advanced to the level that what people used to imagine in a sci-fi movie is closer to becoming a reality. In fact, this is the era where people are living in one. However, the prominence of herbs, especially in India and China has not disappeared. Many families pass their knowledge to their next generation who continue to practice the traditions whether it is certain custom or cooking style. A few herbs are consumed directly, and a few can be cooked and eaten along with the main meal, as a side dish. Manathakkali keerai kootu is one of the side dishes, famous in Tamil Nadu since ancient times.

According to Wikipedia, black nightshade leaves are used to treat mouth ulcers and is a widely used plant in oriental medicine. Though not proven by modern science, ancient texts clarify that they contain antitumorigenic, antioxidant, anti-inflammatory, hepatoprotective, diuretic, and antipyretic properties. Black nightshade has been used for stomach irritation, cramps, spasms, pain, and nervousness.

IMPORTANT NOTE: Pay caution while choosing the black nightshade berry. According to WebMD, often people do not distinguish between black nightshade and the more poisonous species, deadly nightshade, which is known as great morel.