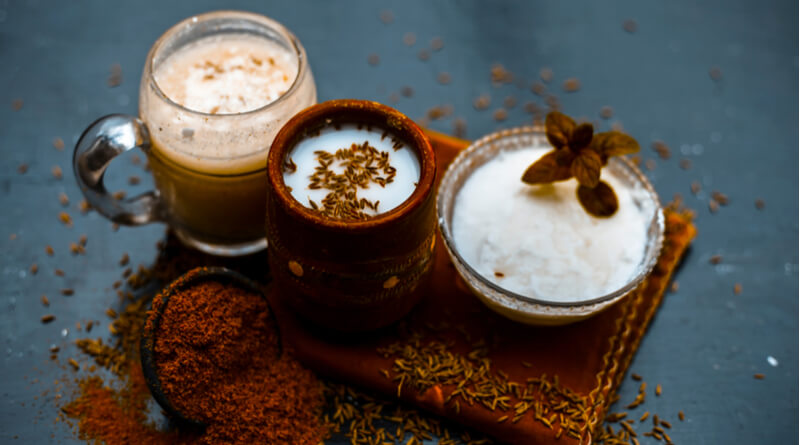 Summers in India can sometimes get really unbearable, and heat strokes are pretty regular with the Global Warming increasing day by day. Lots of people often go dehydrated or resort to fizzy and carbonated drinks which are not really healthy considering their side effects. India is known to be a country of traditions and traditions is also about food and drinks. India itself has its own version of traditional drinks which are not only hydrating but are also known for their refreshing and nutritive properties. So here are 5 Indian traditional drinks you can try this summer instead of all those fizzy drinks.

Buttermilk or traditionally known as Chaas is a favorite for everyone during the heat. Buttermilk is basically a curd-based drink which originated in Northern India. When mixed with jeera and salt and some coriander, it is the most refreshing drink to have in summers. Buttermilk doesn’t take more than 5 minutes to make, and you can carry it with you to office or school in a flask or bottle.

Found in every nook and corner in India, this drink is filled with vitamins and fibers. It also amazingly works like an electrolyte which instantly energizes your body. It is a perfect drink to beat the heat. So, every time you feel dehydrated, grab some coconut juice and feel the difference. Doctors and nutritionists swear on the nutrition content in the coconut water.

Completely native to India, this naturally sweet drink is a savior on a hot summer day when you feel like thirsty and dehydrated. It’s also known to be a remedy for a lot of ailments and sickness. It increases body fluids and builds up your plasma. It is perfect in restoring energy, and when served with mint leaves or lemon, it becomes extra awesome!

Now this one is a sweeter version of buttermilk. Lassi is a complete native of Punjab in Northern India. In fact, even to this day, no one can make better Lassis than Punjabis it is said. This creamy and smooth yogurt-based drink is known to be a special treat in summer. Lassis come in a lot of variants, whether you have it outside or you’re making it at home, lassi can be made fruity or tangy or sweeter depending on your add-ons. One would be adding banana and walnut to it which makes it sweeter and crunchy. You could also add mango to it and turn it into a mango lassi which is very popular by the way or add mint leaves and avocado to make it refreshing.

Now, this is no surprise that lemonade has always been the “go-to” drink in summers or when someone dropped in the home during a hot summer afternoon. Lemonades known for their electrolyte properties and nutritive properties, it’s a comfort drink for anyone. Lemonade tastes best when made with sugar, salt, and mint leaves. A tangy twist could be given to it by adding a few spices like coriander, black pepper, and cumin powder.  It’s a perfect choice rather than carbonated or fizzy drinks any given day!