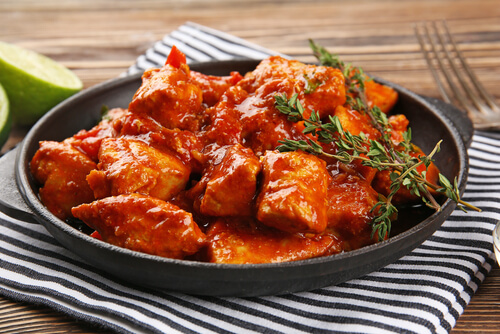 Tikka masala is an Indian sauce prepared in almost all the Indian restaurants. The fame, this sauce has acquired is significantly because it is an appetizing and an exquisite delicacy. Not to miss, the creamy and orange-colored sauce is a feast to eyes as well as tongue. Pop into anyrestaurant in India, you will never miss the sweet aroma of tikka masala and chicken. This is a kind of delicacy you can find in any of the restaurant’s menu in India. Once you taste settles in your tongue, it becomes inevitable for you to come back for more.Couldn’t jog your memory as to where you must have heard of tikka masala? Well, in most cases, the taste of tikka masala takes birth in your tongue by the star cook in your family – your grandma or your mom, the core reason why many people are self-proclaimed foodies now; your nosy neighbors who discuss various recipes or… let’s just be thankful for you having heard of it and now you can’t wait to know how to excel in the preparation of the tantalizing tikka masala sauce that should be smeared on the chicken breast!

When your tongue creates unrealistic expectation of making restaurant-like chicken tikka masala at home, especially during festive seasons, this article will come to your rescue. Read on to nail the tikka masala sauce in just an hour or less. In the article below, I am going to summarize all the steps you need to go through when preparing your tikka masala sauce and latter show you, how it is garnished with chicken to make a broth that your mother forgot to show you how to make.